It’s rare to find a pub in London that’s got a real local feel to it, but it doesn’t take long after you’ve walked through the door to realise that this is exactly what you’ve found.

Just a 5-minute walk from New Cross Gate station, The White Hart is a craft beer haven run by brothers Joseph & Patrick Ryan (aka. The Cellar Boys). They’ve got a whole range of beers on tap and they even brew their own, including Cellar Boys and Hazey Pale Ale – the former being a collaboration (or collaBREWation) between Cellar Boys and ÖL Nano Brewery & Bar.

But, if ales aren’t your thing and you like to have a few bubbles in your beer then you’ll be glad to know that the Lost & Grounded Keller Pils lager is light, refreshing – and something quite different to what you’ll find in a standard chain pub.

This month (being Veganuary and all), The White Hart has teamed up with What The Fattoush to bring plant-based, Middle-Eastern cuisine to their patrons.

What The Fattoush is the brainchild of Jessica Howe and Megan Maule, who met whilst volunteering in the Calais Jungle in 2016. They were so inspired by the experience and the refugees they met (who taught them how to cook Middle-Eastern) that they came back to start their own business, which helps support charitable causes in and for Palestine.

So onto the food… My friend and I shared a starter, two mains and two sides – let me talk you through it.

Smoked Chilli Confit Hummus (& warm Arabic Bread) – The hummus dish was both delicious and Instagrammable. Don’t be put off by the chilli because it wasn’t spicy but it did pack a lot of flavour. 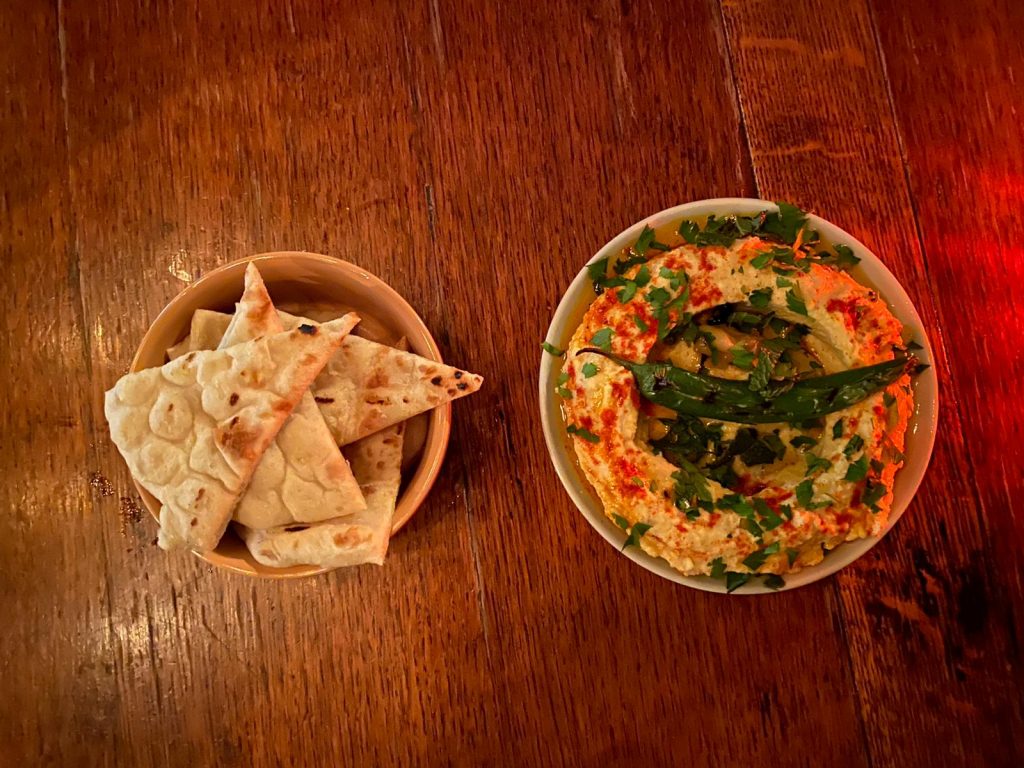 ‘Chicken’ Kofte Plate – When I’m eating vegan middle-eastern food I’ve become pretty used to getting falafel, hummus, veg and not much else. I mostly stick to eating clean and organic food at home, but when I’m out I do like to try the ‘fake-meats’ – especially if it’s a kebab.

The kofte had a very “chickeny” texture and was seasoned so well that I had no doubt I was eating a kebab. The side salad was also very well put together and complimented the rest of the meal really well – this isn’t an overstatement, side salads are usually don’t make a big impact and are overlooked, but this one fit really well. It’s also the first time I’ve ever liked the taste of olives, which I put down to the well-thought-out combination of complimenting flavours. 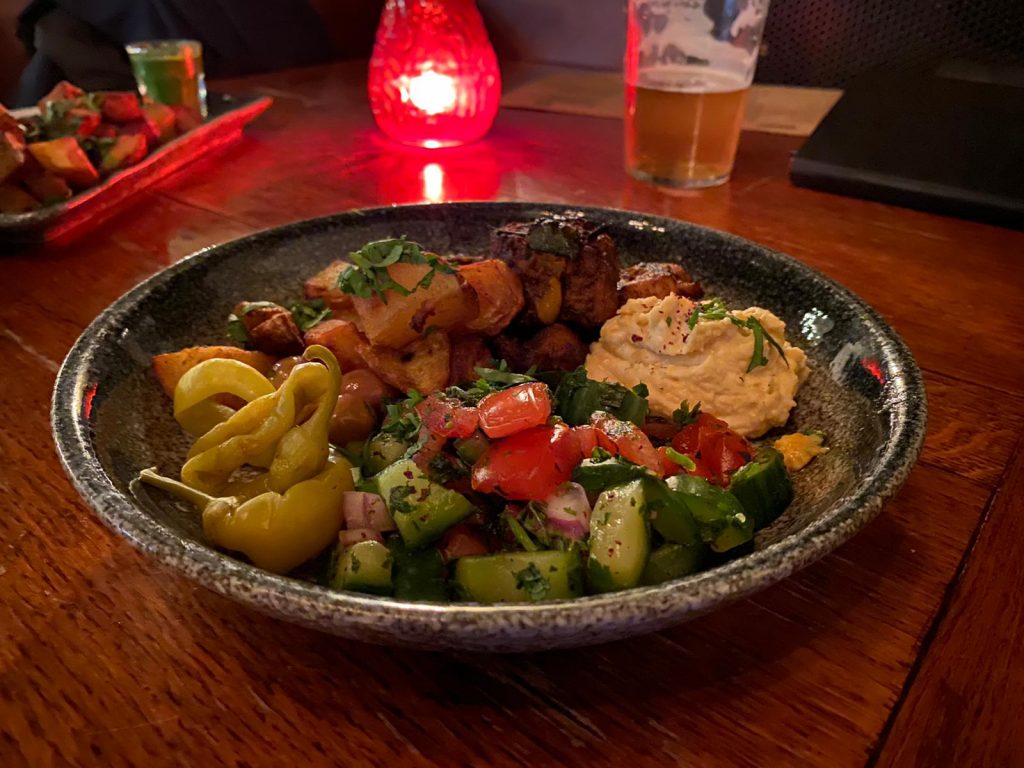 Palestinian Plate – This wasn’t my dish, but my (non-vegan) friend said it had great Middle-Eastern flavours and was impressed by the taste of the “feta cheese”, which was spot on – although he said it didn’t have the same crumbly texture. 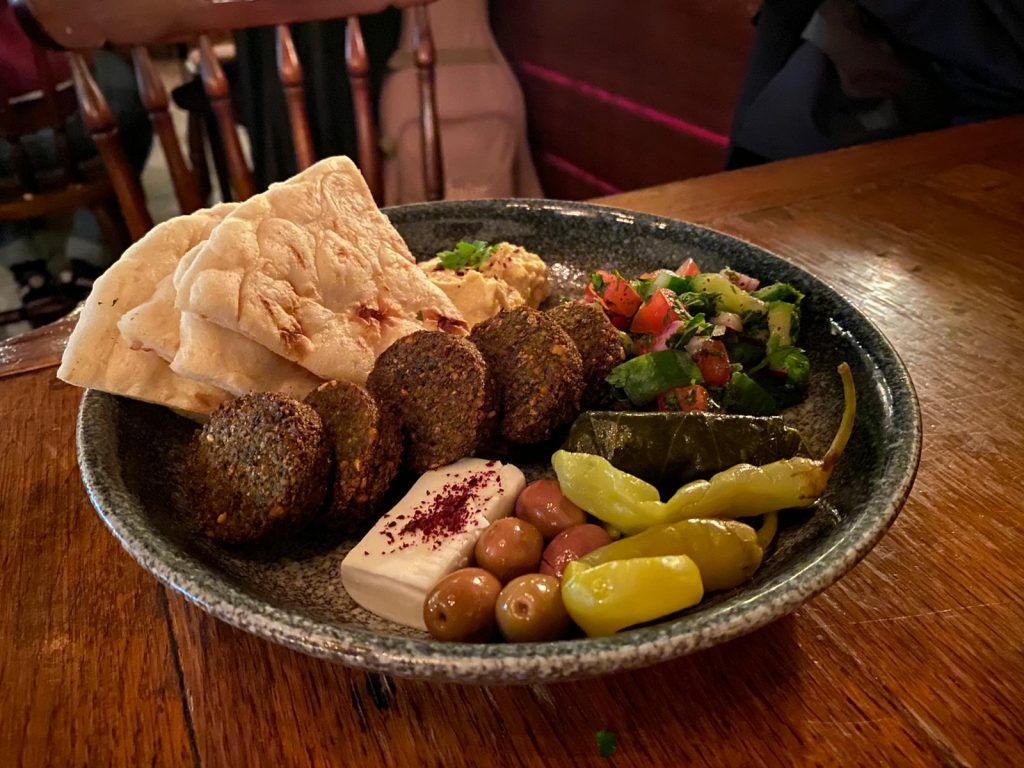 Cauli Poppers (with Garlic Aioli) – These were my choice, and the only regret I had was sharing them! They were, incredible. The batter was light and the cauliflower was perfectly cooked. The texture of the cauliflower when biting into it was just so on point – I could have eaten a whole bucket of them! 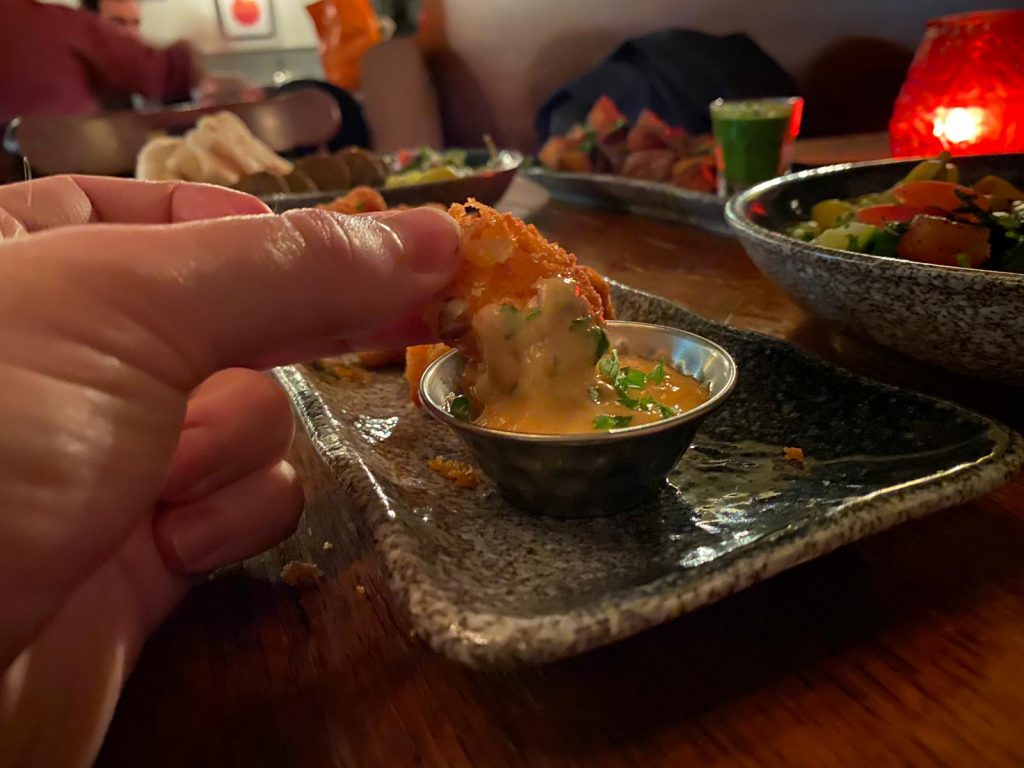 Cumin Spiced Potatoes (with Garlic Aioli) – The potatoes were well seasoned but we both ended up with a few of them on the plate with our main dish. A nice addition but it wasn’t mentioned on the menu – if it was, we probably wouldn’t have got them as a side.

In hindsight, I really wish I pushed him to get the Okra Fries with Date & Tamarind Sauce. These are fried in batter using the White Hart’s very own Cellar Boys brew, and since seeing some pictures they look amazing! 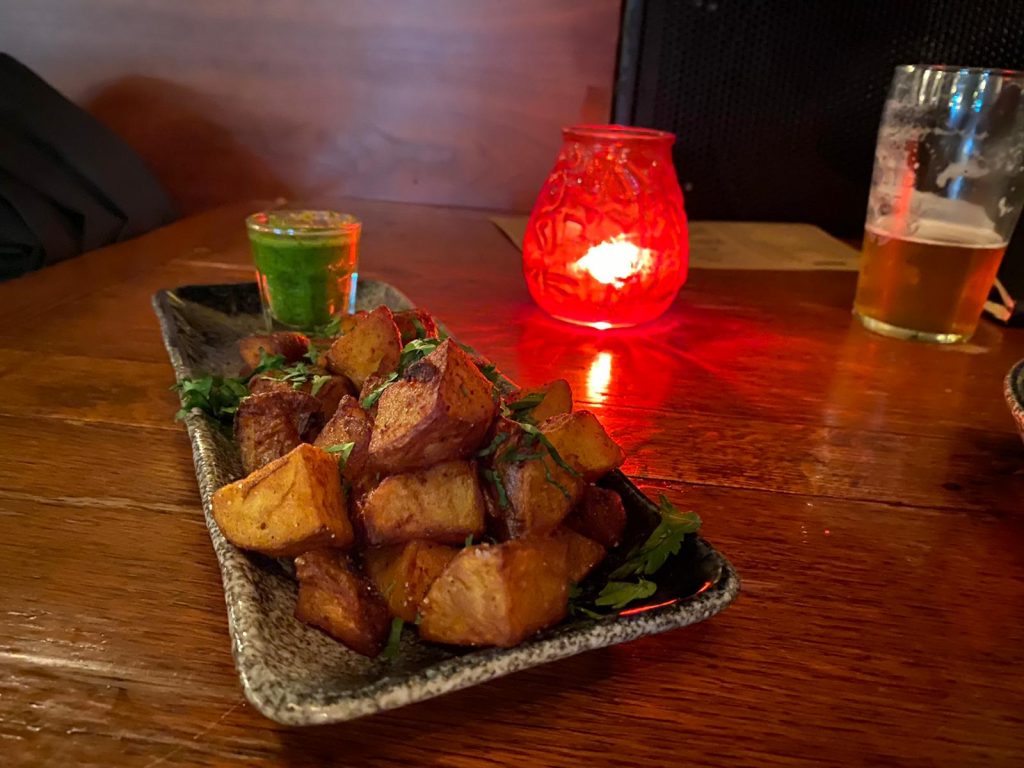 You can keep up with all the goings-on of The White Hart by following them on Instagram: @whitehartse.

Tom is a freelance copywriter and journalist, who enjoys nothing more than reading a good book, in a good pub with a (good) pint of Guinness. Although he's not vegan, he loves vegan food and is an admirer of Italian cuisine - so basically pasta and pizza... Or even more basically, carbs and cheese.
Posts created: 1 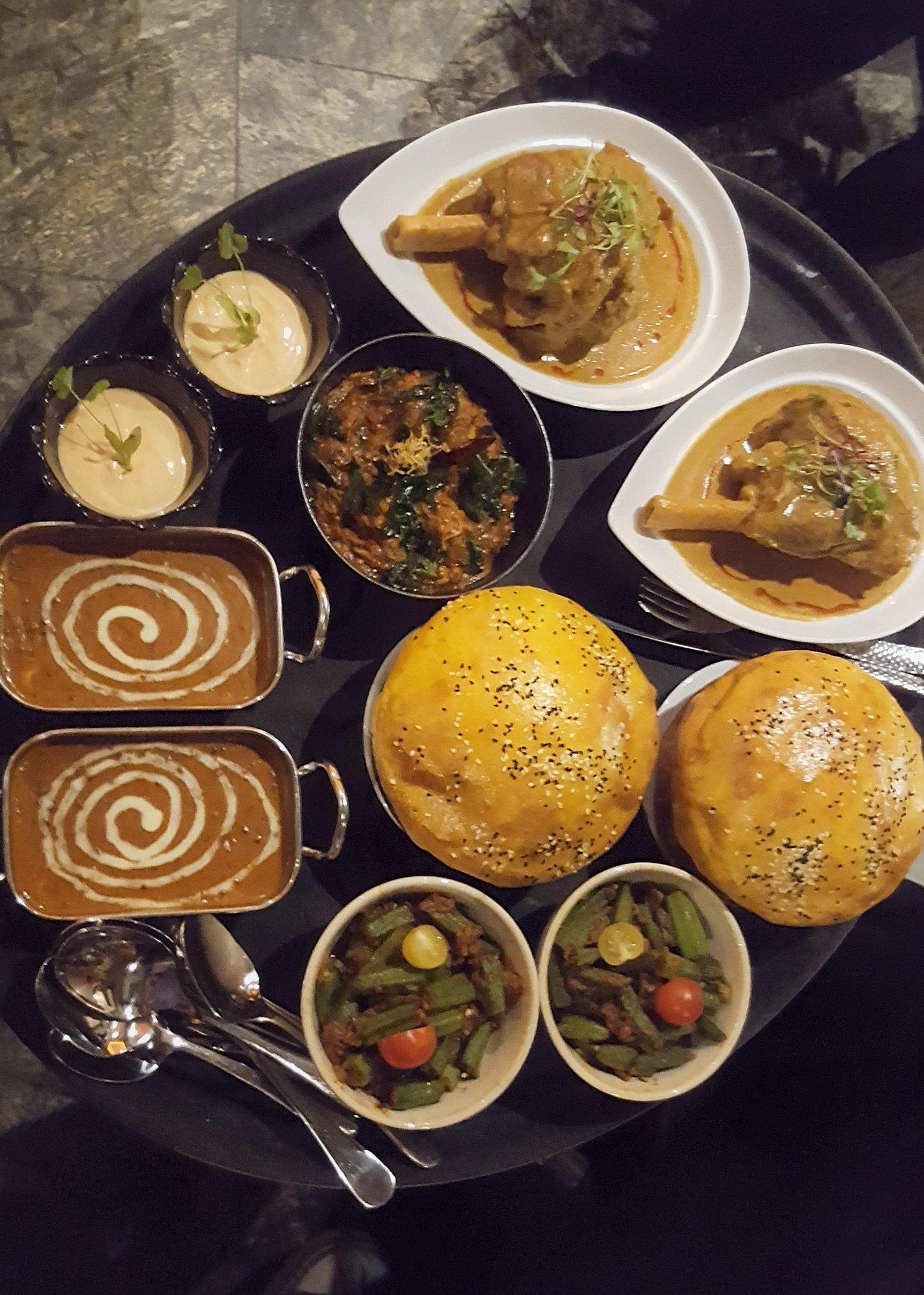 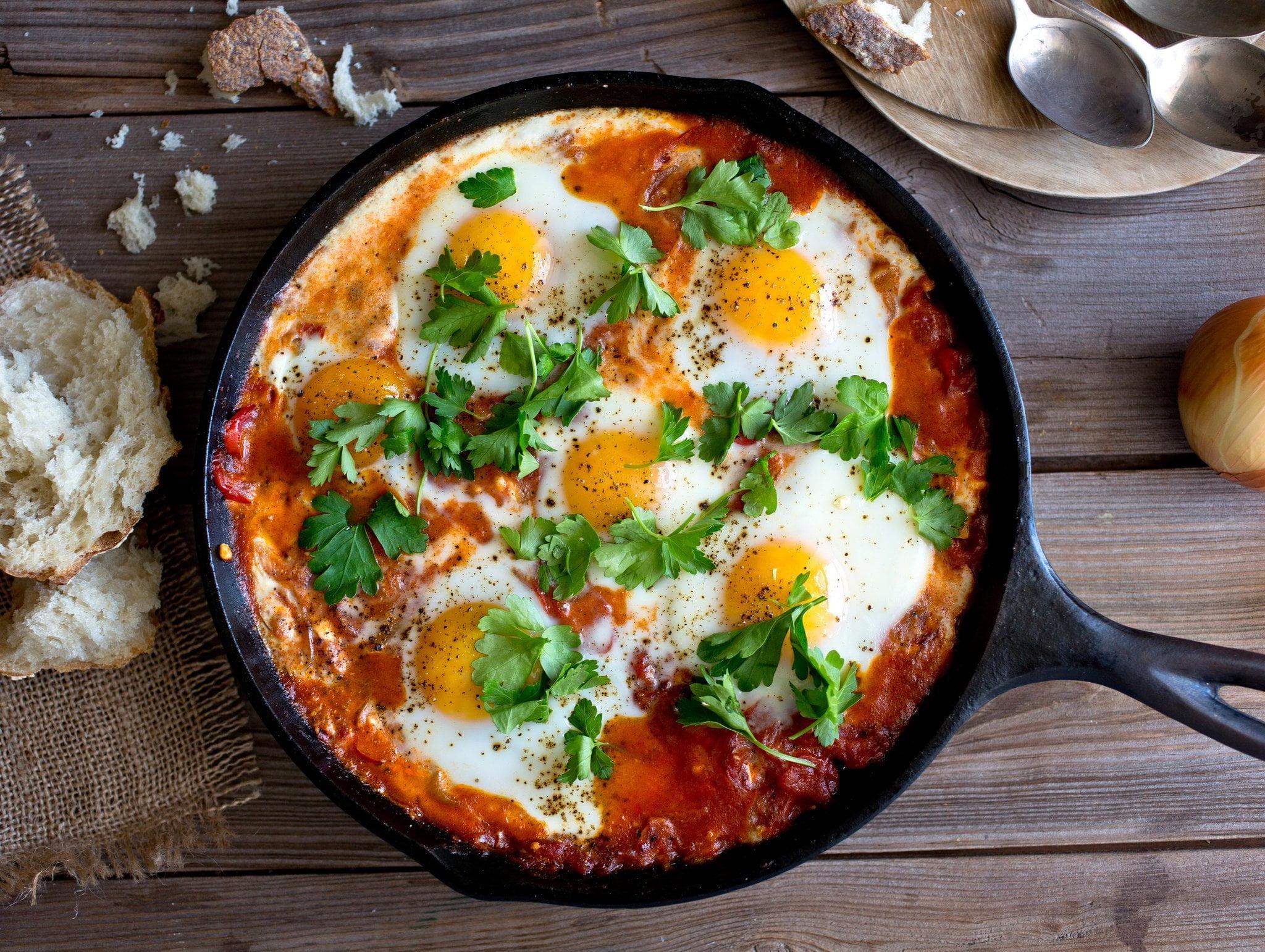