When my friend first suggested we go to a Lego exhibition, my eyes lit up as memories of the big dusty cardboard box filled with a sea of Lego bricks came flooding back to me. The hours, nay, days spent deciphering instructions only to find the dog had swallowed that all important piece. In my wave of nostalgia I could barely contain my excitement.

The exhibition, The Art of the Brick, is being held at the old Truman brewery until January 2015 and celebrates the brickwork of Nathan sawaya, an American 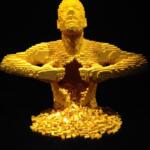 lawyer turned self proclaimed artist (more on that later). After parting with £14.50 (adult ticket) of my hard earned cash, I had to await entry. Exciting? Yes, rewarding? No.

We were ushered into a video room and were subjected to a documentary on the artist, his intentions and a sort of manifesto that anyone could pick up a Lego (insert trademark) and make what he makes, insisting in a candid remark in his workshop that Lego (insert trademark…again) did not make special bricks for him. The video also revealed his secret of keeping his structures from falling apart…patience and superglue. Something more obvious than a “secret” ingredient to success.

After watching this video, I entered the gallery with a sour taste in my mouth as the video had been rife with condescension and not a so subtle plugging of the Lego brand (another trademark). Nevertheless I soldiered on – someone had to – only to be angered by the captions that accompanied the various pieces of work. Nathan humbly compares his art to the pop art pioneer Andy Warhol, whom he had made a portrait. This is just one example of attempted humour, that came across as egotistical and arrogant. 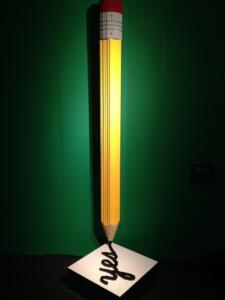 In between the inane captions and “inspirational” (aka idiotic) quotes projected on the walls there was some interesting work to look at. A Lego (insert tra..well you get the picture) man with bricks bursting from his chest, the Picasso replica, and the T-Rex were stand out pieces for me. Seeing them in the flesh was really interesting as I found myself wondering how it was constructed and how long it took to make (details of which were frustratingly absent from the detailed information that accompanied each piece).

I was disappointed with the execution of this exhibition as the actual work itself is awe inspiring and a joy to look at, but to dress it up as art (sponsored by Lego) ruined the experience for me. It should have been presented as what is was – intricate Lego structures that look really cool. Nothing more, nothing less. In trying to reach the younger members of the audience, Sawaya alienated the older connoisseurs through condescension. Looking through the guestbook I wasn’t the only one holding this opinion either.

If you want to look at some awesome Lego structures and don’t care about the pricey entrance fee, then it’s worth a look. However, If you like art with a bit more depth then approach with caution and whatever you do, don’t read the writing on the wall…you have been warned. 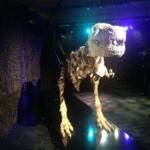 Alternatively you could just have a go yourself

Previous article Counting The Cost Of Homes, Morals And Culture

Next article Nine Below Zero – Review