When I was offered tickets for the London Chinatown tour by London Restaurant Festival, I jumped at the chance. London Chinatown has been part of my food memories for as long as I remember; eating at various Chinese restaurants with my family almost every Sunday.  I was curious to see what restaurants the festival had picked to represent one of Britain’s favourite cuisines.

I pride myself in being knowledgeable about Chinatown and I am usually the first person people go to when they want recommendations for a good Chinese (or any restaurant for that matter!)   However in recent years I have to admit that even I’ve stuck to my regular Chinese comforts and these days I have rarely deviated away from Four Seasons restaurant, known for their amazing roasted meats, and London Chinatown restaurant and Joy King Lau which does fantastic, value for money dim sum.

According to their website Mao Tai is the only Chinese restaurant specializing in the regional cuisine of Guizhou, a region of China bordering Sichuan (known for its spicy food and peppercorns which produce a mouth numbing heat).

This was our first and favourite restaurant serving the most distinct tasting food with similarities with its Szechuan neighbour; smoky notes with just subtle tones of heat that gradually layered up with every mouthful.  Definitely worth a return visit to see what else the rest of the menu has to offer.

When Plum Valley first came to the Chinatown scene it stood out like a sore thumb.  A dark building, blacked out windows without the display of hanging duck, pork and radioactive, orange coloured squid that you might you usually see in restaurant windows.  The restaurant simply said ‘Plum Valley’. Through a heavy wooden door is a sophisticated and stylish restaurant with unusually good service for Chinatown (for those of you who dine regularly there, you’ll know what I mean about the service).  The restaurant serves all the classic dishes that you would expect, sweet and sour dishes, black bean sauce dishes, aromatic crispy duck and typical noodle plates.  The food is tasty and reliable, it’s not standout but the ambience definitely is compared to its Chinatown neighbours. 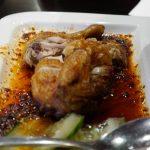 Looking through the Chinatown guide, I was definitely pleased to see Malaysian and Singapore cuisines.  Rasa Sayang is more café than restaurant with a slightly chaotic atmosphere with waiters and waitresses shouting across the room; an element which for some reason makes it feel authentic. The tasting menu chosen for the London Restaurant Festival was an elaborate showcase of Malaysian cuisine.  Three different types of rice and curries were on offer alongside chicken satay skewers, spring rolls and lots of sambal (a chilli sauce prepared with shrimp paste, garlic and ginger).  Rasa Sayang presented the best introduction of their food to diners who aren’t too familiar with Malaysian or Singaporean cuisine. A comprehensive menu with photographs to accompany their dishes it make it a diner friendly restaurant.

Stepping into Far East Bakery made me realise how far Chinese establishments in Chinatown have come.  Previously, Chinese bakeries have been basic in appearance, a little bit shabby and just a little plain.  Far East Bakery is modern and sleek and has a selection of traditional baked goods on display to eat in or takeaway.

FAIL. That’s right; I failed my mission to eat at all six restaurants in six hours.  It’s not often I eat six proper meals in six hours so it seems more training is needed to a) widen my stomach and b) make sure my heart doesn’t give out. Below are the two restaurants I missed out on:

A restaurant specialising in Szechuan cooking and serving up dishes such as Ma Po Tofu which I believe means Pock Marked Old Woman.  Ok, so the thought of eating an acne faced older lady  sounds gross and a tad cannibalistic but I guarantee this dish is delicious and displays the distinctive spice and mouth numbing heat of Szechuan peppers.  A quiet unassuming establishment sitting just outside Gerrard Street; definitely worth a visit if you like your food with a bit of a kick.

I’ve visited this Malaysian restaurant several times for its big portion of food that pack a punch and for reasonable prices too.  My favourites are the Malaysian classics, Laksa and Nasi Goreng and they do a fantastic Hainanese chicken rice. A reliable restaurant for a quick and cheap meal with friends that won’t disappoint.

Didn’t quite make the cut

I was disappointed not to see one of my absolute favourite Chinese restaurants in the Chinatown tour- The Four Seasons.  In my opinion, the best restaurant to go to for roasted duck, roasted char siu pork and crispy pork.  Their roasted meat dishes are unrivalled in Chinatown and their classic dishes such as sweet and sour prawns are excellent, juicy prawns, not too greasy, not too sweet or salty and they don’t cheat you by overloading the dish with vegetables.  Their other notable dishes are their sizzling beef steak in black pepper sauce and their salt and pepper squid. All dishes served with traditional Chinatown service- nonexistent. Go early in the week or book to avoid disappointment as people flock here to try their excellent meats otherwise you’ll have a Burger and Lobster situation where you often have to put your name on a list and come back .

Chinatown is a MSG minefield for novices and we often don’t think about where to go; if it smells good and there’s dead animals hanging in the window then we naturally think it will be great. Don’t be fooled otherwise you could end up having a Chinatown hangover on the toilet seat.

Next article 6 London Halloween Events to get your Teeth into