Full disclosure, I hate electro. I mean, why bother? Where are the guitars? Etc. But Caravan Palace? Well, that’s different. That’s electro-swing. The swing makes all the difference. So I was excited. The French band Caravan Palace at Brixton Academy? Count me in. 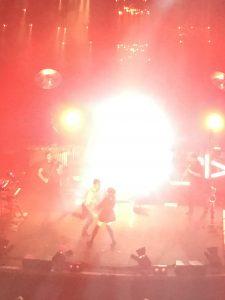 But before we could swing, first we had to electro. The support act comprised two guys in back bomber jackets and black baseball caps who didn’t say much. They waved their hands and pressed some little square buttons on a desk. That was about it. Apparently it’s a thing these days but I couldn’t help wondering where the guitars were. I have no idea what the name of the ‘band’ was or the names of any of the tracks. They didn’t have names, or lyrics, or guitars.

Did I mention guitars? If I’m honest, I didn’t really care. I was waiting for electro-swing and this was just electro. I became a conscientious objector of anything vaguely electro the first time I heard Pet Shop Boys play a synth and I’ve never looked back. So if electro is your thing, this might have been good. Personally, I couldn’t wait for them to finish. Like the 80s.

When Caravan Palace came on stage however, I couldn’t wait for them to start. Literally, they couldn’t start because of a ‘technical’ issue. That proved a little awkward because if you’re an electro band, the electro is kind of important. The audience, made up of women with fashionably short Parisian haircuts and men who were doing what they were told, seemed pretty forgiving though. Someone, ‘switched it off and switched it on again,’ while the band noodled around on their various instruments. 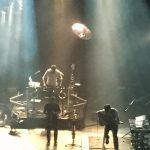 Ironically the technical fail at the start reminded us that this was more than a techno band of button pushers. If the two lemons in the support act had had the same tech trouble, they would literally have had nothing. But Caravan Palace is made up of real musicians. Of the 7 band members on stage, at least 6 were multi-instrumentalists. So while Caravan Palace’s sound still relies on the electro tech, the swing part comes from keyboards, a double bass, piano, percussion instruments, clarinet, trumpet, violin and, thankfully, a guitar.

The technology failure was a buzzkill that was hard to recover from. They did a good job, no doubt, but it would have been a better gig without the, ‘This will just take a few minutes…’ 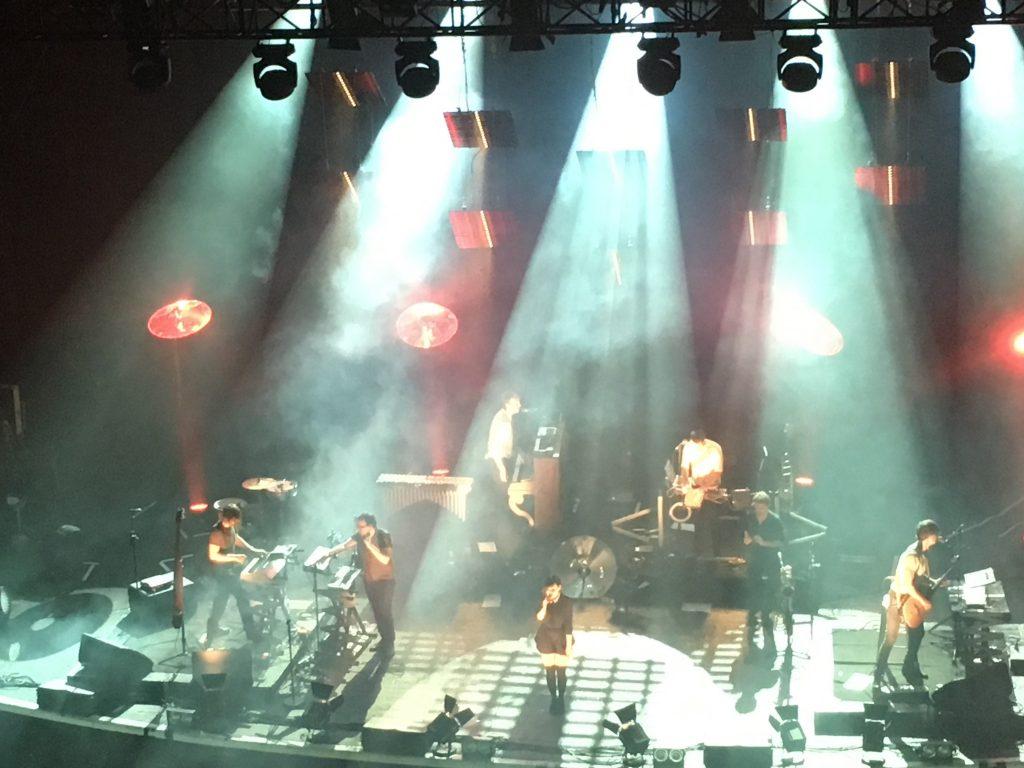 When we were under way properly you could understand how the band is gaining in popularity. When everything works, it works really well. None of the many moving parts in this band are superfluous – even the glockenspiel worked. Every instrument had a purpose and that included the magnificent scat vocals from Zoé Colotis.

Zoé was fronting the band most of the time, but the other members also seemed to take turns at leading the music. Sometimes the vocals and the scat. Sometimes the keyboard, sometimes the guitar. Sometimes it just all worked together. Beat, rhythm, syncopation and… q 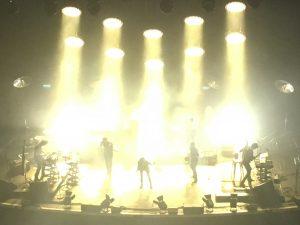 uirk. It’s the only word I’ve got for it. Quirk is where the electro meets the music. Not just playback loops, music. Contagious, foot tapping, hip swaying and, well, quirky. The ‘plinks’ the ‘bleeps’ the ‘plonks’ all beautifully synchronised with the saxophone, the 50s swing sound of yesteryear and, lest we forget, a guy on a guitar. I liked it. A lot.

If you’re not familiar with the band, check out ‘Lone Digger’ and ‘Rock If For Me’ both of which were nicely executed at the gig (complete with onstage swing dancing). They really didn’t need to do any covers, everyone was happy with the caravan Palace groove, but when they did throw in a reworked cover it had all the more impact. ‘Black Betty’ with an electro swing Caravan Palace groove is something to behold. I recommend it to you all.

Tour dates continue into December around Europe and you can download the album here.

If you’re not familiar with the band, check out ‘Lone Digger’ and ‘Rock If For Me’ both of which were nicely executed at the gig (complete with onstage swing dancing). They really didn't need to do any covers, everyone was happy with the caravan Palace groove, but when they did throw in a reworked cover it had all the more impact. 'Black Betty' with an electro swing Caravan Palace groove is something to behold. I recommend it to you all. 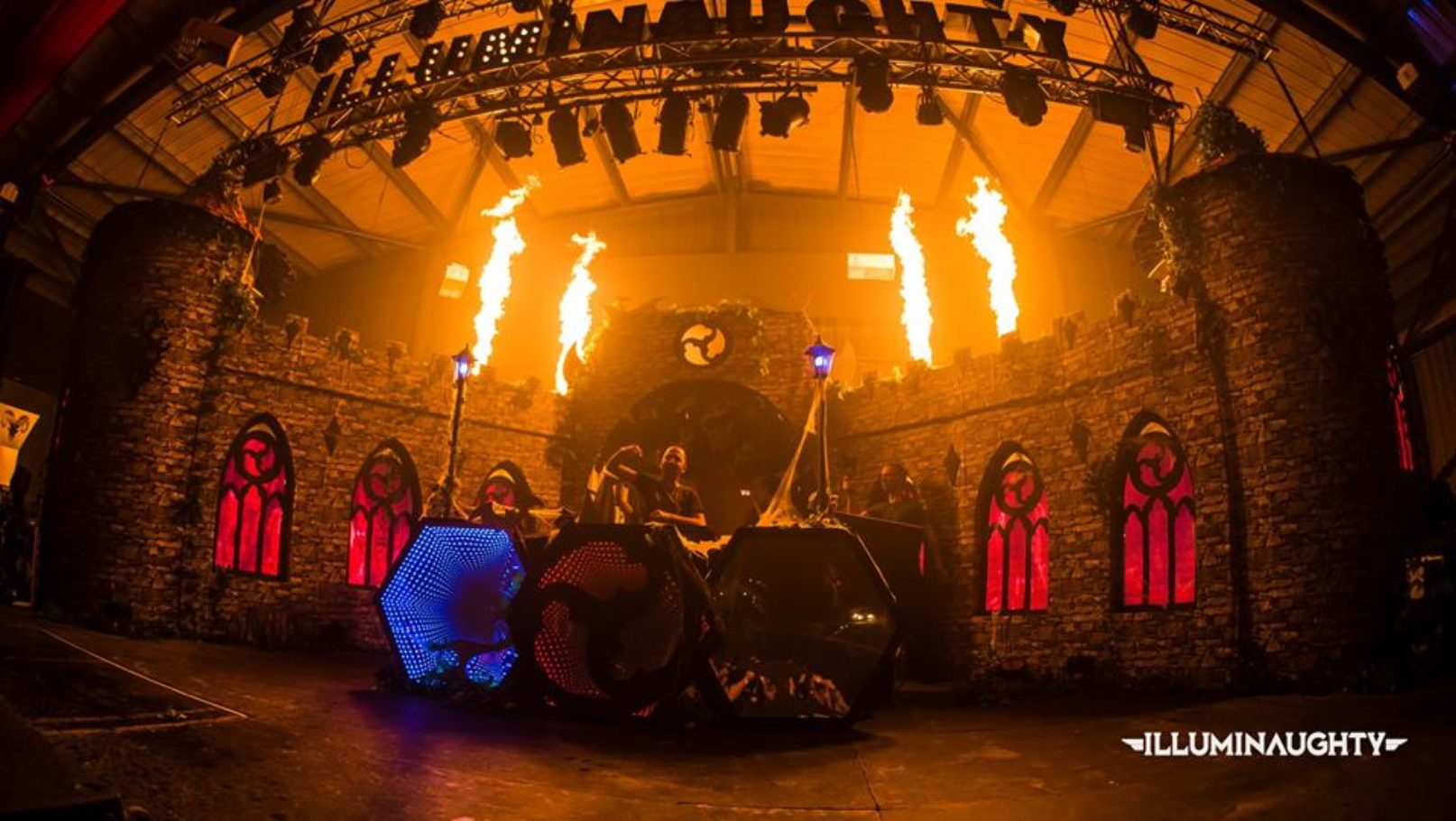 The Rave of Thrones – Review