The great thing about London is its constant ability to come up with new ideas or recycle old ones and present them as new.

On Friday 2nd October 2015 Kettner’s presents a new way of reliving and re-imagining of old times back when WW2 was over. You can imagine there were some huge parties back then, celebrating not only Hitler being defeated but relief that it was all over.

LIGHTS OUT! follows on from the sell-out of their first one in April, where the upper two floors will once again be transformed into a fun-filled celebration of wartime London after dark.

This of course isn’t for those who don’t like dressing up as they recommend getting your victory curls, high heel shoes on, turn out in military finery (not Nazi as it’s not cool) and jitterbug the night away at a party inspired by roaring 40’s dance halls and the home front’s famous neighbourly spirit!

What can you can expect? Union jacks, sandbags, oil lamps, searchlights and for those who want to pay extra, a wartime inspired 3-course ‘Home Front Menu’ served with a contemporary fine dining twist.

Plus there will be dance classes from Swing Patrol, rousing renditions of old Wartime classics with Tom 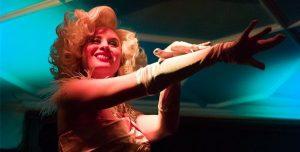 Carradine’s Cockney Sing-a-long and close-up magic by Billy Kidd (though why a cowboy is doing magic at a British 1940’s party is beyond me) .

However probably my favourite are the gramophone manipulators The Bees Knees who will hopefully be using actual gramophones rather than Technics or a Macbook.

Their dress code inspirations include: allied forces chap, GI visiting for one night only, munitions factory girl on a rare night off, ladies of the women’s auxiliary corps.

A Cocktail Masterclass at GOAT – Review