My Night With The Iron Lady and A Pina Colada

There are very few moments in my life when I walk into a bar and think: ‘Where am I, and how on earth did I get here?’ Ok, that’s not strictly true, but it certainly happens less often when, in cases such as this, I’m completely sober.

For the fun of London Cocktail Week, Malibu decided to host a Beach Party at Maggie’s in Chelsea. The club is named after the so-called ‘Prime-Minister-turned-icon’ Margaret Thatcher herself. Now, I realise it’s meant to all be a bit tongue-and-cheek but… is this cool?

We walked downstairs onto a dance floor littered with 80s paraphernalia: lasers and disco balls swirled above us, Madonna and Boy George were stencilled along the wall and a Pac man shaped DJ booth sat at the back. The words ‘No one puts baby in the corner’ were spray painted along the bar, and while waiting for my drink I noticed Margaret Thatcher memorabilia staring back at me from behind the counter.

The staff however were very friendly, especially at the door, and certainly looked as though they were having a fun time joining in with the dancing which is always nice to see. Everyone was adorned with Hawaiian shirts, flowers round their necks and straw hats to add to the cheesy theme. 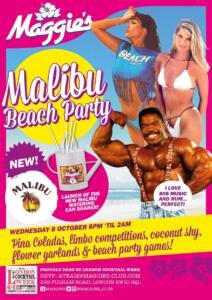 My friend and I both ordered Pina Coladas (mixed in slushy machines, of course!) served in coconut shells. They were very sweet and sticky, but in quite a good way. Other cocktails included The Lick of Sunshine with Malibu, Pineapple and Passion Fruit Juice and a Watering Can Masculine with Malibu, two types of Rum, and Pineapple and Mango juice.

The main problem was that everything on their menu is outrageously overpriced. Cocktails start at £12, the watering can is £65 and a bottle of Bombay sapphire Gin has somehow been bumped up to £200! And if you really want to impress the ladies you can buy a bottle of champagne signed by the Iron Lady herself for a mere £5,000. That’s a bargain if I’ve ever seen one.

Despite our bizarre surroundings the 80s music, albeit cheesy, was fun and the place started to fill up past 11pm with people really going for it on the dance floor.

The clientele were a little older than most, and tables are reserved by the looks of it either for hen parties or groups of older men working in the city… However, it was a relief to be somewhere that didn’t take itself too seriously and if you ever find yourself out late in Chelsea craving a sugar rush and the 80s… well then Maggie’s is your place.

Previous article My Wandering Days Are Over

Next article Wapping Market – Worth Getting up For? 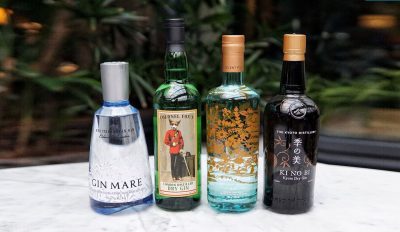