One Year on – Cafrey the official LDN Life cat

It’s a year since we visited Battersea Dogs and Cats home with the intention of ‘looking’ and came home with Cafrey, an old seemly unwanted ginger cat who’d recently had an operation 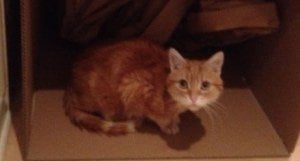 on his Thyroids. Whilst the choice to take him home was influenced by a drunken Irish Gypsy (His words not mine) in a nearby pub, his words stand true to this day.  You can read my original blog post about Cafrey becoming the official LDN Life cat (London Life UK back then) here, I just reread it and got slightly emotional.

I remember at the time the Vet told us they didn’t know how long he would last, maybe 6 months, maybe 3 years but they wanted us to be aware of the possibilities. At the time this was about giving a cat a home, not looking long term or selfish short termism of what if dies soon and we get upset. Because of Cafrey’s seemingly precarious state we were given Cafrey for a donation rather than the usual fee.

Well as you’ve probably guessed he’s still alive and very well, he still gives us a great amount of pleasure even if he’s not the most active or affectionate of cats, but when he is it feels like he really means it. Aside from when it’s feeding time then we know he’s only after one thing. At 15ish he might be knocking on a bit but he’s still got his moments, one of which resulted with large cuts on his belly, a rather costly reminder of our responsibilities. He still dislikes catnip and has a strange fondness for boxes and rarely any interest in anything we buy for him, whilst laser pen time is fun but short lived.

We thought he’d be a happy house cat, but cats are rarely happy cooped up inside. So we let him out on a fairly regular basis, but only when we know we will be around long enough to come back before we go out. Without a cat flap and London’s urban fox problem seemingly not getting any better we don’t want to leave it to chance. Not that he’d have any difficulties finding somewhere else to stay as he knows more people in our street than we do. He often disappears for hours, only to be seen appearing from someone else’s house and as a result not as interested in his dinner. I hope our neighbours know we also feed him.

When we have to leave him for a long period of time, we’ve opted for not sending him to a cattery and enlisted the help of Mr Monty’s Fuss and Feed these guys have been a fantastic over the last 6 months and if you live in South London look them up.

Where Cafrey has failed is the delaying a baby tactic, I thought I’d cleverly deployed once we got him and was his only real responsibility. Needless to say he can’t be truly blamed for this as he’s so dam cute, I just hope he’s still around to get to know the next member of our family.

So cheers Cafrey, you’re the best, especially when you’re awake and semi interested, oh and of course you’re the best official LDN Life cat a blogger could ever hope for. In true blogger/proud father style here’s so some of my favourite picture of you that I could find at short notice.

Finally A BIG thanks again to Battersea for doing the amazing work that you do!

Get off me you crazy penguin

look into my cute big eyes, now FEED me fool!

Another one of him sleeping

Previous article Where to go to play casino in London

A first look at the next generation Santander Cycles