I LOVE PORK! There I said it, it feels good to finally tell the world something I feel so strongly about. But do I love it more than Beef? Well that I’m not so sure about, but thankfully unlike partners (unless you’re a Mormon) it’s perfectly acceptable to love more than one.

So when an email smattered my inbox full of pictures of wonderful porky goodness, I promptly got up and found somewhere that 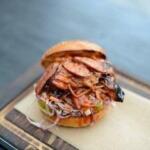 sold pulled pork, in truth I was barely able to read about the event until I’d satisfied my craving.

Pork Life is promoted as a brand new celebration of everything PIG and is brought to you by Big Eater who I’m told are the guys who brought London Ribstock, Chilli Chilli Bang Bang, National Burger Day and rather randomly MasterChef 2011 champion Tim Anderson.

The venue: For those who’ve attended one of the previous events won’t surprised to hear that it’s at Dalston Yard, which is an amazing example of how to make something that looks like a bombsite really cool.

What: Well as you would expect they are promising some of London’s best chefs, restaurants and street food traders. Who will be grilling, roasting, steaming, smoking, pulling, deep-frying and possibly even water bathing what they believe to be the tastiest branch of the animal kingdom.

Who are these people and WHAT MEATY goodness will they serve you? Well the line-up of pork dishes includes: Pork Belly Fried Rice from Nanban,

Who should go: People who love pork (obviously), who want to fill their Instagram account with loads of amazingly cool pictures of food and the yard. Especially good if you have friends coming to stay from out of town and you want to show off another side to London.

How Much: £15pp plus free gifts and drinks, making it ‘virtually’ free. Included in the £15 ticket price is a Boilermaker, which is a shot of TINCUP whiskey to be sipped alongside your Frontier craft lager. ‘Sip one. Sip the other and repeat until no more. You also get some really angry sounding hot sauce. However there is a but and it’s an important but, we went to Chilli Chilli Bang Bang and while it was good, it was too busy and a lot of places were running out of food, though admittedly there was still enough on offer to keep us happy, plus we didn’t get our free gifts 🙁 and for 15 quid you WANT your free gifts, or at least I did!

Admittedly we turned up later in the day and it was a victim of it’s own success, but the mixture of pre bought tickets and on the door entry didn’t help matters. I’m hoping they’ve learnt from this and make sure they have enough for everyone, but if they haven’t just get on with it, it’s a fun and exciting enough place to enjoy with friends or you could complain and ask for more drinks vouchers. (worth a try)

So here’s to the link you’ve been waiting for: Book here!! I’ll be thinking of you all while I’m at yet another wedding.

Finally I’ll going to leave you with Street Life by Randy Crawford, which bizarrely has been going round in my head as ‘Pork Life’ for about the last 3 hours. It’s okay, no need to thank me 😉

Celebrate the soft launch of LIV with 50% off your food bill!