Zoe’s Ghana Kitchen is not new to LDN Life, Cordelia reviewed one of her Pop Ups back in August 2013 and she said it was something to savour, thus giving me food envy ever since.

So when we were invited to experience Zoe’s 6 course tasting menu to preview and launch their new residency at King & Co near Clapham Common we were more than happy to oblige.

The venue was Four O Nine, above the weekend mad house of The Clapham North pub, a place I used to know very well and have hazy memories of. I’d always wondered what the side door and intercom was actually for but not enough to even find out, so I was pleasantly surprised to find a smallish cool venue which felt a world apart from downstairs.

After meeting our table and eyeing up the menu, we were greeted by a very energetic Zoe, after just a few seconds you could see why she has done so well over the 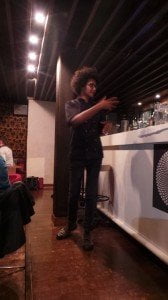 past few years. Her energy had two negative side effects however, I struggled to take a none blurry picture of her and being in the presence of so much energy made me feel even more tired.

First up the Turmeric and Thyme Cassava Patties & Chilli and Ginger Okra Tempura, the simple fact that I happily ate Okra is testament to her skill; however the Tempura lacked the crunch I was expecting, but the chili sauce with prawns in it was fantastic.

Next up was the last on the menu, Jollof Spiced Chicken skewers w/ Jollof Rice and Relish, this was so we had a plate for the rest of the evening, as I may have

forgotten to mention we were sharing most of the dishes, but not this one and that was fine with me. The chicken was very tasty and reminded me a bit of Satay. The rice was full of flavour, though some people around the table thought it was under salted, but I was more than happy.

One thing I was rather less happy about was the temperature of the food, not just with this dish but with all of them. It could be that this is how you are supposed to have your food in Ghana and I’m just a narrow minded guy thing. Plus trying to serve 40 people at the same time means that there are always going to be some concessions, I expect the takeover of King & Co to not have the same issue/non issue.

Red Red and Kelewele: slow cooked black-eye beans in a gently spiced tomato and palm oil sauce and caramelised plantain infused with fresh ginger cinnamon and nutmeg was actually my favourite dish. If you like Sweet potato fries, you’ll be a happy person with these. The Black-eye beans were full of flavour and I’d happily give up chips and beans for a plate of this again.

Roast Mackerel in chilli lemon & garlic with homemade Shito and Small Chop Salad was probably my least favourite and only because I’m not mad on fish, especially those that look at you. What can I say, I’m a fillet guy. The fish though was lovely and meaty, the rest of the table made quick work of it and I picked off bits with my fork.

5 hour braised hogget shoulder in a spinach & agushi (ground melon seed) stew cooked with fresh ginger coriander and large vine tomatoes. Well this is what I was looking forward to the most and aside from the slight fish taste left over from the mackerel course, it didn’t disappoint. We had soooo much rice we could have sunk a battleship. The only issue was the amount of Hogget, I have to share it and this made me sad.

Finally Bofrot (Puff Puff) (Ghanaian Style doughnuts) with Kenkey Milkshake Shots. The doughnut was lovely but what the hell was in that shot? The first half was nice enough but I left the 2nd half.

Zoe’s Ghana Kitchen takeover of the King & Co starts on 30th March and runs until 31st May.

If I was scoring this purely on potential enjoyment at King & Co I’d easily give it a 4 out of 5, but rating the night as it was and it’s a 3. Something’s really worked, whilst other bits didn't, warmer food would be a good start, but this will be much less of an issue as they won’t be serving 40 people the same dish at once.